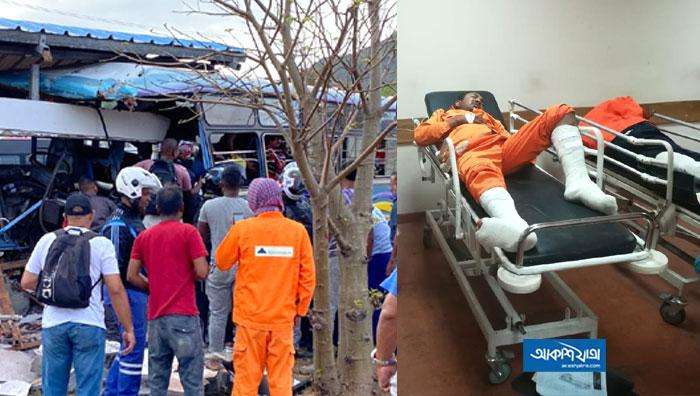 Four Bangladeshi workers have been killed in a bus crash in the Indian Ocean island of Mauritius. 17 Bangladeshis were injured. One of the injured people in critical condition, Dr. Bangladeshi of Port Louis. AG has been taken to the Intensive Care Unit of Jitu Hospital.

The accident happened on Thursday (November 5) near Port Louis, the capital of Mauritius. There were more than 50 Bangladeshi workers in the bus.

Bangladesh High Commissioner to Mauritius Regina Ahmed confirmed the matter to Akashyatra, saying the bus was going to the company’s office with more than 50 Bangladeshi workers working at a construction company called Hivek Limited. The bus crashed on the way. 512 Bangladeshi workers are working in that organization. Three died at the scene and another died at the hospital.
The deceased were identified as Faruk Islam, Sanjay Das, Rakib Mollah and Abdur Razzak. Family members other than Abdur Razzak confirmed the identities of the dead, the high commissioner said.

Regina Ahmed added that one of the injured was kept in the ICU. In addition, the injuries of the other two are also somewhat serious. The condition of the other five hospitalized is not critical. Out of these 6 people admitted to the hospital, 10 other Bangladeshi workers have been released after initial treatment.

Regarding the repatriation of bodies in road accidents and compensation to the victims, the High Commissioner said that a meeting has been held with the Ministry of Labor of Mauritius to return the bodies to Bangladesh, compensate them and ensure treatment of the injured. The employer hivec has confirmed that it will pay compensation. Besides, he will take full responsibility for the treatment of the injured.

Bangladesh High Commission Embassy Chief and Labor Counselor Ohidul. Ahidul Islam said the bodies of four Bangladeshis who were killed after the inquest were kept in the morgue of the hospital. The bodies will be sent to Rathaka under special arrangements after the flight to Mauritius was suspended due to the epidemic.