Woman gave birth to a child in the middle of the sky flight!-DailyProbash.com 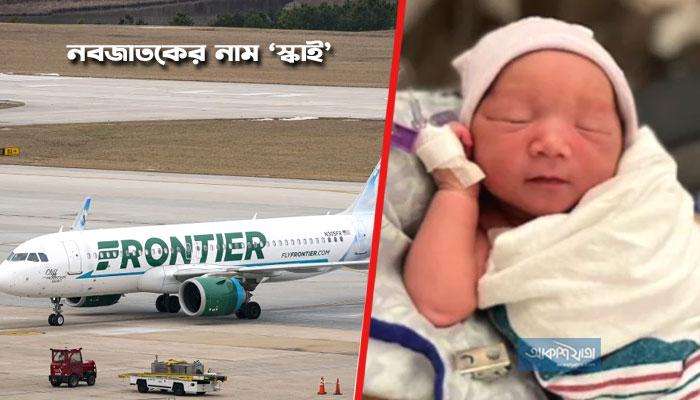 A woman gave birth to a child in the middle of the sky. An employee of a Frontier Airlines flight has been accorded the status of a ‘hero’ by assisting the child-bearing woman in childbirth. Dedicating the place of childbirth, the passenger named the newborn ‘Sky’. News from NDTV.

The flight of Frontier Airlines, a well-known American airline, was en route from Colorado to Florida. Diana Giraldo, the flight attendant of the plane, came forward to help one of the passengers of the flight who was suddenly in labor. The name of the passenger was not disclosed by the airline.

The captain of the aircraft, Chris Ne, called the aid a “precedent” for Geraldo. He also mentioned that helping in giving birth to healthy and strong children in the middle of the sky is heroic.

The captain added that he was informed of the incident during delivery. He was then in contact with Pensacola Airport, assigning the first officer the responsibility of the aircraft. Paramedics were on hand to help with the delivery at the airport.

“It’s been a wonderful day,” said Captain Ne. He likes to think that everyone on the whole plane worked together for a successful delivery.

The passenger also named the newborn ‘Sky’, according to Frontier Airlines. Needless to say, the name is dedicated to the ‘birthplace’ of the girl.

Meanwhile, the rush to greet the new mother has also started on social media. No one is forgetting to congratulate the staff of Frontier Airlines.

One Facebook user wrote, ‘This is awesome! By the grace of God all is well. Congratulations to all concerned. Great job. ‘

Another user wrote, ‘This is a story that is not usually told or heard. Fortunately, the flight attendant’s knowledge came in handy. ‘